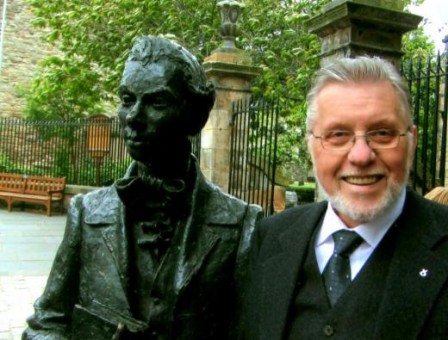 In poetry we sometimes look for a connection with Burns, and who better to showcase than David C. Purdie with his Villanelle version of Tam O' Shanter, one of five versions (including a ballad and a haiku) which Poetry Scotland published. There isn't room for all of them here, but we may as well squeeze in the haiku, which ran:

Villanelles, always difficult to write well, have become something of a joke form for poets and this high spirited example is well worth sharing. It is actually double the length of a standard villanelle, but then it did take Tam a wee while to get back from Ayr.

Thair cam ti Tam a fell mishanter,
A sair stramash on his road hame,
As he frae Ayr ae nicht did canter.

He heard Auld Nick blow up his chanter.
Saw jiggin crones that haed nae shame
As he frae Ayr ae nicht did canter.

The jaud gart Tam a randy panter,
He maun his wuidrim oot proclaim!
As he frae Ayr ae nicht did canter.

As he frae Ayr ae nicht did canter.

David C Purdie has long been familiar with the Scots poetry scene, having worked with Neil MacCallum on recording Sydney Goodsir Smith's poems for Scotsoun, and with other groups. In 2002 he wrote a translation of the Welsh poem The Gododdin into Scots. When this ancient battle took place, some of the southern Scottish tribes spoke a form of Welsh. Those of us who knew of this translation were very keen to see it published. Colin Will of Calder Wood Press brought it out as The Godothin, a year after The Biggers and Other Poems by Purdie, in 2008. The Godothin is still available.

David adds: “My motive for translating Y Gododdin was not because the battle took place on Scottish soil. In fact it was fought at Catraeth, near the present day Catterick in Yorkshire. My reason was that the Gododdin was a Lothian tribe who feasted and caroused for a year before the battle, in their chief fort where Edinburgh Castle now stands. I can see them in my mind's eye riding off to their doom down that rocky ridge now called the Royal Mile."
David Purdie's interest in Scots led him to essay other translations, including a version of Fitzgerald's Rubaiyat. He says that he wanted to make Scots sound as beautiful as English. In the case of the Rubaiyat that was a tall order, and in the end Rab Wilson did another Rubaiyat from an earlier text.

Our photo shows Scots poet Robert Fergusson in the good company of David C Purdie, who was photographed there as a member of the committee that planned, fundraised and commissioned the now well known statue, when it was set up by the entrance to the Canongate Kirk in Edinburgh.

Ach…. but the heart is gallus by George White