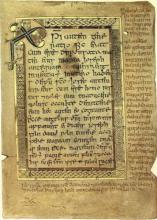 The earliest texts in Old Irish consist either of glosses of Latin, short texts and some verses dated during the 7th and 8th centuries AD, of which the Wrzburg Glosses are perhaps the most important collection. Irish was also the earliest of the vernacular (non-Latin) languages in the British Isles to be written down. Old and Middle Irish gave way to Early Modern Irish (1200-1600) and this in turn gave way to Modern Irish from 1600 onwards.

Ireland was invaded by the English Crown in the 1170s but never fully conquered until 1603. Norman and English settlers began to take on Irish language and culture and so attempts were made to reverse this when the Statutes of Kilkenny (1367) sought to forfeit landowners who did not speak English. A further Act, in 1537, attempted to do the same and set up English schools in the parishes. Gaelic bards were also discouraged.

The final conquest of Ireland (1603) and plantation of Ulster (1609) led to the break-up of the old Gaelic learned class and leadership and to a decline in the fortunes of the Irish language. Attempts to convert the population to Protestantism were made with the translation of The New Testament into Irish in 1602, followed by the Old Testament in 1675, and the first works printed in Gaelic, in Ireland, appeared in 1571, though the Scots had already printed a Gaelic text in 1567.

Irish was spoken by most people in the island of Ireland probably until the 18th century when a number of factors, official oppression, mass emigration etc, led to a dramatic decline. The first enumeration of speakers, in 1851, returned 1, 524, 286 (24% of the Irish population). By 2001 there were 167, 487 claiming to have some knowledge of Irish in Northern Ireland (10.4% of the population of the Province) and in the Irish Republic in 2006 1, 656, 790 speakers enumerated (40% of the Republic population).

The rise of Irish nationalism led to the creation of Conradh na Gaeilge (The Gaelic League) in 1893 for the promotion of Irish. Though the language became the first official language of the Free State, created in 1921, support on the ground has still continued to decline. Although Irish is required for civil service jobs, and in other areas, the actual number of people who speak Irish as a daily, native language, is thought to be about 30,000, mostly in the officially Gaelic-designated areas.

www.ucd.ie/bnag Bord na Gaeilge at the University of Dublin exists to promote the teaching of Irish at the university and offers courses in the language.

www.forasnagaeilge.ie The official body in Ireland for promoting the language. It has news, history, school resources and details of government policies.

Gaelic was introduced to the Isle of Man from Ireland about AD 500. The language spoken on the island gradually diverged into a distinct form though some called it Irish as late as the 17th century. By the 1690s the name Manx had come into use. This divergence was further enhanced when an English script (rather than traditional Gaelic) was used to write the language from the 17th century onwards. This gave Manx a written form quite distinct from both Irish Gaelic and Scottish Gaelic.

The earliest surviving texts in Manx are John Philips translation of the Book of Common Prayer (c.1610) and some Bible translations. The first printed work in Manx is Coyrle Sodjeh (further advice) by Bishop Thomas Wilson in 1707. Attempts to enforce the use of English through education and religion began a decline in the language but it was the 19th century, with mass migration, and an influx of tourists, that led to the greatest erosion.

It is often claimed that Ned Madrell (c.1878-1974) was the last native speaker but others had learned Manx as children during his lifetime. It is a controversial question as to whether Manx has continued as a native language or should be considered revived by learners. The first survey of Manx, by Henry Jenner in 1874, put the number of habitual speakers at 12,340 or 25% of the Manx population. By 1971 this had declined to just 284 or 0.52% of the population.

www.gaelg.iofm.net/EMENU This website provides general information related to the history, distribution and education in the language.

www.ycg.iofm.net The website of Yn Cheshaght Ghailckagh (Manx Gaelic Society) founded in 1899 to support and encourage the use of the Manx language on Man. Books, tapes and Cds can be purchased from this site.

Gaelic was introduced to what is now Scotland from at least the 6th century AD. It was a Gaelic speaking dynasty that created the kingdom of Scotland between the 9th and 11th centuries but the language began to fall out of favour from the 12th century onwards, first in favour of French, and then the emerging Lowland Scots language.

The earliest surviving Gaelic now written in Scotland consists of notes and glosses in the Book of Deer dated to the 1130s and there is a single charter, the Islay Charter of 1408, also in Gaelic, but neither of these differs from the strict written standard shared with Irish. Indeed, Irish linguists refer to this period as Early Modern Irish (1200-1600) while Scottish Gaels call it Common Gaelic.

John Carswells translation of Knoxs Liturgy was the first work ever printed in Gaelic (in 1567) but it was in the common Gaelic standard rather than Scottish Gaelic. The spoken language gradually diverged until, in the 16th century, the first Scottish Gaelic texts began to emerge, such as The Book of the Dean of Lismore, and, by the early 1600s, people had begun to speak of Scottish Gaelic as a distinct language. Indeed, earlier Scottish Gaels had often embraced Ireland as the mother culture and the term Scottish was often taken to mean Irish in a Gaelic context but, after 1600, this pan-Gaidhealtachd (Gaelic-speaking region) broke up into separate national identities.

There is reason to believe that perhaps half the people of Scotland could still speak, or at least understand, Gaelic during the 16th century but statistics from the 1690s indicate that this had declined to about 30% of the Scottish population by that period. Thereafter Gaelic continued to decline because of state persecution and attempts by educational and religious bodies (such as the the SSPCK) to replace it with English.

Despite complaints of language differences, only Irish Bibles were available to Scottish Gaels until 1767 when the Bible was translated from English to Scottish Gaelic, and the Old Testament did not appear until 1801.

In 1881 the first census of Gaelic speakers returned 231, 594 habitual speakers (6.2% of the population) and by the time of the 2001 census 58,652 people could speak the language or 1% of the Scottish population. During the last 30 years or so a number of organisations have attempted to halt and reverse this decline and latterly the state and media have offered limited support.

www.savegaelic.org As its name suggests, this is a campaigning organisation and has a good deal of information about current news and politics affecting Gaelic as well as dictionary resources.

www.smo.uhi.ac.uk This is the website of the only Scottish Gaelic college in the world Sabhal Mr Ostaig and gives a list of courses that can be taken as Gaelic medium. The college is located on the Isle of Skye.

www.bord-na-gaidhlig.org.uk This is the website of the non-government Gaelic Language Board. It works along with and advises the Scottish Government and other bodies and provides information about jobs in the Gaelic world.

www.scottish.parliament.uk/vli/language/gaelic/gaelicplan For the Scottish Gaelic language plan of the Corporate Body of the Scottish Parliament please see this website.