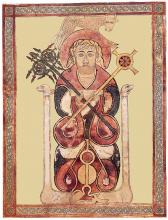 Cornish was spoken in Cornwall and Devon in the early Middle Ages and is the sister language of Welsh. The earliest texts in Cornish date from the 10th century AD and there are several plays in the language dating from the Middle Ages. Originally a kingdom, Cornwall came under English domination from the 920s and it was created a duchy in 1337 for the eldest son of the English king. The Cornish revolted in 1549 when London tried to impose Protestantism and services in English and for a long time the county was known as West Wales. It was not officially made a part of England until the late 19th century. Slowly, however, Cornish gave ground to English until, by the 17th century, it had become a minority language even in Corwall. The last native speaker was long thought to be Dorothy Pentreath (d. 1777) but John Nancarrow and William Bodinar, who died in the 1790s, are now thought to have been the last.

However, Celtic activists revived and recreated the language (borrowing somewhat from Welsh) from the late 19th century onwards. Henry Jenner (1848-1934) was the father of the modern language revival. Cornish was recognised officially under Part II of the European Charter (ratified 2003). It is estimated today that there are, perhaps, 3,500 speakers and there is a campaign for a Cornish Assembly to be established to run Cornish affairs.

www.cornishlanguage.co.uk The history of the language with a language course (Cornish to English) and English to Cornish dictionary.

www.gosw.gov.uk/gosw/culturehome/heritage/cornish Local government website which has information on the status of Cornish and the role of local government in its promotion. www.magakernow.org.uk The Cornish language partnership. It gives the political background to the language movement and provides online translation and phrases in the language. www.cornwallinfocus.co.uk/language Gives a brief history of the language, key dates and useful phrases.

Of all the minority indigenous language in the British Isles, Welsh is certainly the most vibrant in terms of institutional and political support. Welsh first emerged as a distinct language between AD 400 and 700 when it diverged from the common Brittonic spoken also in England and southern Scotland. The earliest Welsh text is believed to be Llyfr Teilo (aka Lichfield Gospels) dating to the mid-9th century.

Wales was united culturally from an early age but remained politically divided and she was conquered by England at the end of the 13th century. Wales remained a distinct polity until 1536 when she was shired and annexed to England. The Act of Union of 1536 attempted to outlaw the use of Welsh from the administration in favour of English. However, from an early period the Welsh language was used to foster religious reform and so the New Testament was translated into Welsh in 1567 and the Old Testament in 1688.

The 1967 Welsh Language Act gave some legal protection to the language for the first time but it was not until a further Act, passed in 1993, that Welsh was given equal status with English in public life in Wales. In 1891 Welsh was the subject of a census question for the first time when a total of 910, 289 people (54% of the population) said they could speak Welsh (of which 508, 036 could speak Welsh only). At the time of the 2001 census 611, 000 people in Wales were enumerated as speaking the language or 20.5% of the Welsh population. In 1993 it was also claimed that 133,000 Welsh speakers were living in England.

Wales is officially bi-lingual with English and Welsh language options often found throughout the UK (for instance public telephones) even where Welsh is not natively spoken.

www.byig.wlb.org.uk The website of the Welsh Language Board gives background information about the language and the work of the board itself.

www.bbc.co.uk/wales/learnwelsh An online course for learning Welsh with phrases and audio resources at the BBC.

www.cs.cf.ac.uk/fun/welsh/welsh An online beginners course in Welsh which has several useful links.