Germanic and Other Languages 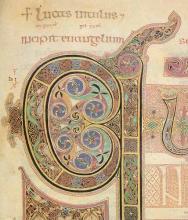 This is as its name suggests, is a variant of English spoken in the north of England, but it evolved long before such a thing as Standard English emerged.

Indeed, Scots and Northumbrian share a common origin in the Anglo-Saxon that was spoken in the region between the Forth and Humber estuaries during the period AD 500 1100, though books and websites dedicated to Northumbrian rarely, if ever, acknowledge this relationship. It was the Anglii (Angles) who brought this language to the region in the 6th century and they called it englisc (Angle-ish).

This northern form was first written down as words cited by Bede (about AD 700) and as glosses in the Lindisfarne Gospels, added about AD 900. It is also attested on the Scottish side of the border as a carved runic text, The Dream of the Rood, on the Ruthwell Cross, dated about AD 750. Old Northumbria was conquered by the Danes (AD 867-883) and they modified the language with Scandinavian influences.

After 1018 Old Northumbria was split between Scotland and England and the modern counties of Cumbria and Northumberland emerged. The author of Cursor Mundi (c.1300) stated that southern English texts had to be translated into Northern language for people to understand while Ralph Higden in 1364 described the language of the Northumbrians as strange and hard for the southern men to understand which he understood to be because the Northumbrians bordered foreign men and nations (i.e. the Scots).

Osbern Bokenham, writing about 1440, also stated the same. However, Northumbrian began to decline in status by the 16th century when the English state began to centralise more and texts based on Midland and Souhern English became standard.

To those in power in southern England, the speech of Northumbria was less elegant. During the 19th and 20th centuries a great deal of Northumbrian dialect literature was written, consisting of poetry, letters and newspaper articles but Standard English was enforced in the schools.

Perhaps the most well known form of Northumbrian speech is Geordie which is spoken in and around the city of Newcastle and which has conspicuous features shared with Scots such as the pronunciations toon (town) and words such as canny (careful) or gang (go).

Though a number of dialects are spoken in England today, Northumbrian is, arguably, the most conspicuous and has probably resisted erosion from Standard English most successfully.

Information about Northumbrian dialect and Geordie speech can be seen at: www.Northumbriana.org.uk/langsoc The Northumbrian Language Society.

www.geordie.org.uk As with most information related to Geordie speech, this is a humorous site but it provides translation from Geordie to Standard English.

Romani is the language of the travelling people who have been in Europe, and the British Isles, since the 13th century having originated in Asia. Romany is spoken in some 42 countries today and appears in several related forms depending on the linguistic influences absorbed from host countries. However, it is only during the last couple of centuries that the language has come to be written down.

Romany is spoken by communities distinct to the various countries of the British Isles and has, to an extent, influenced local speech. For instance, the Faa family, residing in the Scottish Borders, were generally acknowledged as the leading or kingly family of the travelling people in Scotland, and many words, such as gadgie (man) or barry (fine) have found their way into the Lowland Scots language.

In the period down to the 19th century there are occasional references to the travelling people in burgh and kirk session minutes being arrested or moved on. The Scottish state did not trust people who had no fixed abode, master, or who spoke a language that was not understood (as described by witnesses).

www.En.wikipedia.org/wiki/Romany_language This article provides a detailed description of Romany from origins to present.

This is the language used throughout the British Isles as an administrative and official language and it is largely based upon the language of the Midlands and South-East of England. Its word stock is expanded by extensive borrowings from other languages, most notably Greek and Latin. It emerged in the form we know today during the 1800s and was imposed, by various methods, on the peoples of the British Isles and British Empire.

Probably very few people speak Standard English as a native tongue but virtually everyone speaks it in certain situations for specific purposes. The benefits of having a common international lingua franca must always be weighed against the curtailment of native languages.