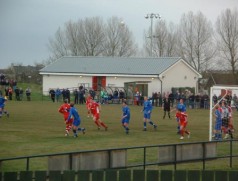 There have been poems, songs and ditties about football almost as long as the game has been known to exist in Scotland. Football is first mentioned when King James I banned it by act of parliament in 1424, an act repeated by James II in 1458. James IV did likewise in 1491. Why? Because the Scottish kings wished their subjects to practise the more ‘profitable’ pastime of archery, which could be used for the defence of the kingdom.

The oldest of such football verses can be traced back to the early 16th century and illustrate the nature of the game. We are used to thinking of football hooliganism and violence as a modern problem, but early verses show that football was a rough, dangerous game in its early form. The earliest recorded trouble at a football game took place at St Andrews University during the 1530’s when the students descended into a riot and had to be brought to order by the masters! In another incident, in 1601, the Cockburns and Davidsons were playing football and started shooting pistols at one another. One 16th century verse declared:

In those days, the name was usually spelled ‘fute-ball’ or ‘fit-bal’ (the ‘l’ being a long vowel sounded as - ‘aw’) or some other variation, but it came to be pronounced as ‘fitba’ in Scots. For example, the modern form had begun to emerge when King James VI, writing in 1597, called it ‘fitball’ which he considered a ‘rumling uiolent’ game.

The Church of Scotland also looked on the game in the same light, and thought that the many boys and men who played the game on the Sabbath were committing a great offence, and so the church elders continually tried to ban it. Many ministers also disliked the fact that football was played on old saints’ days. Some tried to play along as a way of bringing people into the church. For example, William Chamber at Monzie, Perthshire (1691-1702) appears to have been the first Church of Scotland minister who played the game. But it was John Skinner, Episcopal minister at Monymusk, Aberdeenshire (1742-1807), who was the first to write a modern description of the game in his famous ‘Monymusk Bawing.’ In this he described a fast-moving, rough and ready game:

Wow, as their heads did birr!

Some baith their shou’ders up did fyke,

Their teeth that day.’

This game, that often left the players with ‘twa bleedy shins’, had yet to be codified and professional. Games such as those played in the streets of Kirkwall had to be banned in 1826 because of the threat to the peace of the town and its property, but, during the Victorian period, people began to form into distinct teams governed by rules of conduct.