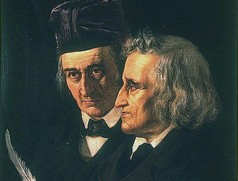 The Grimm brothers generally known as the Brothers Grimm were two German scholars who collected stories and traditions, mostly from central Europe, during the 19th century. It would be fair to say that it is because of them that we today are so familiar with stories such as Cinderella, the Frog Prince, Snow White, and others which have been brought to a global audience by the largely American film industry.

Jacob (James) (1785-1863) and Wilhelm (William) (1786-1859) Grimm were natives of Hanua in Germany, but because their father died young the family lived a hand to mouth existence in their earlier years. Eventually James and William attended the University of Marburg where their interest in traditional lore and stories was first kindled. Soon they developed their skills as linguists and researchers and set out to collect what they regarded to be traditions linking 19th century Germany back to an earlier, purer society that had not be corrupted by industrialisation.

Indeed, this era of history has often been referred to as the Romantic Period during which scholars and thinkers, and nationalists, began to yearn for a way of life they thought was being lost, or had been lost. This led artists to produce new poetry, history, stories, song and paintings depicting past societies as imagined by contemporaries. In 1812 James and William Grimm published their first work, a collection of some 200 stories called Kinder-und Hausmrchen (Childrens and Household Tales).

In the course of their research the brothers travelled around Germany, but also collected some Danish, Irish and Norse stories too. They also claimed many stories as German that had, in fact, wider pan-European roots. Such stories had developed different versions in different parts of the continent, with details being added or lost according to the tastes and needs of the host society.

The Grimm brothers claimed too that what they were doing was collecting the ancient traditions of the peasantry, and thereby reflecting an earlier and simpler way of life, but many of the stories were actually obtained from upper class and scholarly contacts with the result that some stories were more recent inventions. Nevertheless the Brothers Grimm did succeed in preserving many stories and traditions that might have been lost which open a window on earlier societies, sometimes stretching back to the Greek and Roman eras. The brothers may also be credited with establishing the modern concept of folkloristik (folklore) which we understand today, but which is sometimes difficult to define exactly. For more on this aspect read our article about folklore in Scotland.