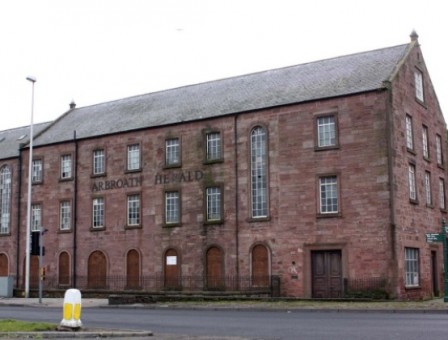 The songs of the millworkers of Scotland are perhaps best embodied by Dundonian Mary Brooksbank's song, Oh Dear Me, also known as The Jute Mill Song:

Oh dear me, the mill's gaen fest
The puir wee shifters canna get a rest
Shiftin bobbins coorse and fine
They fairly mak ye wark for yer ten and nine

Listen to Mary Brooksbank (1897-1978) sing and describe how she composed the song at the Kist o Riches website.

Here's a more modern version by the late Jim Reid, from his Springthyme Records album with John Huband, Freewheeling Now:

More information on the song is available at the Scotland's Songs website.

David Shaw of Forfar's famed composition The Wark o the Weavers referred more to the hand-loom weaving trade which existed all over Scotland prior to industrialisation. Shaw (c. 1776-1856) had Chartist sympathies and authored several other well-known songs including The Forfar Sodger. His Weavers song was taken up by groups such as the Clancy Brothers and became widely sung, largely in anglicised form, in the United States during the 1960s folk revival. Here's a version by 1950s group The Reivers (Josh MacRae, Enoch Kent and Rena Swankie) followed by Cilla and Ray Fisher (albeit with some modification of the original Angus Scots!):