King James and the Werewolves 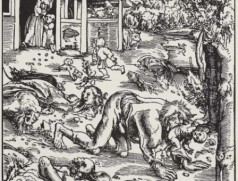 The earliest known writing about werewolves – in the Scots language – dates from 1597. No less a personage than King James VI wrote briefly about the subject. The idea of the werewolf had really taken off in Europe in the wake of a famous murder case that occurred in Germany in the lifetime of King James. Although the king believed in witches, he was not, like many of his subjects, so ready to believe everything about the supernatural world without some degree of scepticism. James did not think, for example, that men actually turned into wolves but rather they suffered from a form of madness (‘superabundance of melancholie’) which made them act like wolves. In the manuscript of his book ‘Daemonologie’ the king discussed the idea of werewolves in the form of a dialogue as follows: