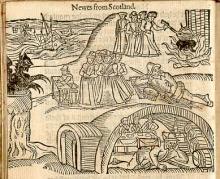 The festival of Halloween began as the pagan festival of Samhain (as it was named in the Gaelic language) in which pagan people believed that the worlds of the past, present and future merged together, and when the dead and mortal could commune with one anther. It was also the last day of the year in the old pagan world. People kindled up great roaring fires to frighten away evil spirits, drove their cattle to winter grazings and prayed for a good harvest in the coming year. The Christian church took over this old festival and named it the festival of ‘all saints’ in honour of the good Christian dead, so the concept that this time of year went hand in hand with the world of the dead was kept going. In the Scots language this time was first called ‘Alhallow mes’ in the 14th century and appeared in the form ‘Hallamas’ by the 16th century. The night before – 31 October – was ‘Alhallow evin’. The ‘l’ after the ‘a’ in the spelling was, in fact, a vowel length marker used to indicate that the ‘a’ was pronounced as a long vowel, so ‘Alhallow’ was pronounced as ‘aw-hallow’. By the modern era the forms ‘Hallaeen’ and ‘Halla day’ had emerged in Scots.

At Halloween there are a couple of figures or rituals that are well-known today: the ‘guiser’ (trick or treater), ‘dookin for aipples’ (dunking for apples), and setting out lanterns made from turnips. The trick or treater originated as a person who acted in a religious play during the Midle Ages who was ‘guised’ in order to fool evil spirits. It is believed that dunking for apples commemorated the pagan passage of the dead across the water to the land of apples (meaning the land of plenty) which was called ‘Avalon’ in the Celtic languages. At Halloween the spirits of the dead and monsters could come through into the world of the living and lanterns were thought to frighten them away. Needless to say the church in Scotland was against such traditions. In the Early Modern age people were greatly in fear of witches and James VI (1567-1625) wrote about them and werewolves both. Witchcraft was made punishable by death by the Scottish parliament in 1563. During the 16th and 17th centuries any old wives who had knowledge of healing were classed as witches and executed. It was imagined that they and other witches gathered together on the Sabbath at Halloween in order to make spells and contracts with the devil against good Christian people. The last people to be officially executed for witchcraft were Lachlan and George Rattray at Inverness in 1706. However, the final person to be executed, without official sanction, was Janet Horn, burnt at Dornoch in 1727. Even after this people in some areas of Scotland imagined that some individuals had the power of witchcraft as late as the 19th century and the Witchcraft Act of 1735 carried up to a year in prison for pretending to practice it.

Witches apart, the people of Scotland came to believe in many kinds of entities and unearthly beings and a few even held such ideas into modern times. The Scots language has an abundance of names for strange beings and spirits connected with Halloween, the dead, and the supernatural world in general. Here are a few of them. The English word is given first followed by the version in Scots.