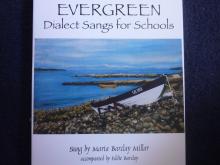 Maria Barclay Millar has produced a CD of Shetland songs all sung in the Shetland dialect, 'Evergreen, Dialect Sangs for Schools'. As a singing teacher, Maria felt there was a need for audio versions of Shetland songs. She was able to test this resource in the classroom and noted: ' The project has been met with so much enthusiasm from pupils, teachers and parents'.

The songs are all suitable for Primary children to sing along to. Some are traditional, others are new, all are an effective way of introducing or reinforcing Shetland words. The CD which contains a pack of lyrics, worksheets and glossary, also works well alongside existing resources such as the Gearbox CD.

Further details are available from Maria at maria.millar@shetland.gov.uk
Maria has kindly allowed us to broadcast one of the tracks from this CD. Listen here to 'Skerry Song', a song containing references to various seabirds. The words are by Harry Kay and the music by Ronnie Matthewson. Maria sings the song herself and is accompanied by Eddie Barclay.