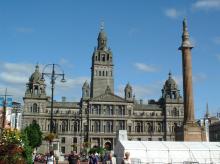 The Auld Scotch, Glaswegian, Glesca Scots, The Patter. These are the names by which the native language of the city of Glasgow and surrounding region have been known in modern times, and which is called West Central Scots by linguistic scholars. This month, the Scots Language Centre focuses on this rich and often controversial variety of the Scots language. It is rich because the Glasgow region has often been at the forefront of innovation, coining many new Scots words and phrases that reflect changes in modern Scottish society, and controversial because some scholars have argued that the Glasgow region is, perhaps, the least Scots-speaking area, having lost many traditional features of the language still present in other areas of Scotland today. For this reason, and because the speech of the city is often only portrayed in certain contexts by the media (for example, the Glesca ned), it is probably the most denigrated form of Scots.

It is important to remember that what is spoken in the Glasgow area today is not spoken in isolation but forms part of a wider entity which is the Scots language. While Glaswegian Scots might be distinct from other forms it cannot be separated from them. Each form of Scots, each region, merges gradually into the speech of its neighbour.

Scots in Glasgow has become an invisible language, spoken but rarely acknowledged. To date, Glasgow council, heritage industries and commercial ventures have promoted some languages but have been slow to consider the huge potential of using the Scots language to sell the region, attract tourism and boost the confidence and identity of a population which has, arguably, suffered from a great deal of cultural and social exclusion in the recent past.

For more on the history, status and use of Scots in the Glasgow region, please click on the various features located on the left hand menu. In 'Glasgow Beginnings' learn about Scots in Glasgow before 1700. In 'Breaking the mould' read about changes in the 19th century.

To hear a traditional ballad in Scots from Glasgow please click on the 'Bleacher Lassie o Kelvinhaugh' at the top of the left hand menu above.