In 2010 the Aye Can website was launched to help the public understand how to approach the census question on Scots language ability. In March 2011 the census of Scotland asked for the first time in its history whether people resident in Scotland could speak, read, write or understand Scots. 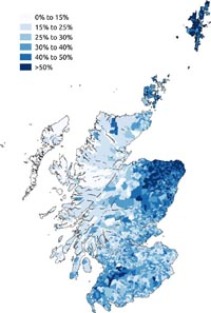 The census results showed that just over one and a half million respondents had self identified as being able to speak Scots. That was 30% of the Scottish population.

In answer to question 16 of the census a total of 1,541,693 people has identified themselves as able to speak Scots. A further question, 18, asked for 'Language other than English used at home'. Although Scots was not a predetermined option, 55,817 people proactively entered Scots under 'other'.

The census result for the number of Scots-speakers confirmed the research carried out in 1996 by the NRS’s predecessor organisation, the GROS (General Register Office for Scotland). The 1996 survey had estimated the number of Scots speakers at 1.5 million.

SLC Analysis of Census 2011 for Scots

Scots in the Census: Validity and Reliability by Dr Caroline Macafee

On release of the census results for the question on ability in Scots by the National Records Office Scotland in September 2013, Michael Hance, Director of the Scots Language Centre, said, "These figures are great news but after centuries of neglect it is time for action to be taken to safeguard the language for the future. The data gathered during the 2011 census gives us for the first time ever information about the number of people who speak Scots, where they live and which demographic groups they fall into. This means that we can begin to plan how to support communities of Scots speakers and to encourage those communities to value their language and pass it on to future generations."