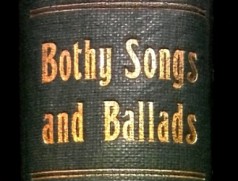 'Bothy ballads' is the name given to the songs of the farmworkers of northeast Scotland, although the accuracy of the term is of some debate. The name supposedly reflects the dwelling place of the authors and performers of songs about farm life in the nineteenth century.  'Bothies' were outbuildings used to house unmarried farmworkers, although this was only true in certain areas of the country. Bothies were more common in Angus than Aberdeenshire, but it is the latter that has become best known as the heartland of bothy songs.

Traditional bothy ballads were mostly composed between 1830-1890, and are often characterised as being songs decrying the conditions on a certain farm or in some cases certain farmers, seemingly gaining notoriety for places such as Drumdelgie, the Barnyards o Delgaty or Rhynie. However, bothy ballad expert Ian Olson points out that  the songs were jokes rather than satires. He notes that Delgaty, for example, was a prestigious farm, "famous for having the very best of equipment, horses and horsemen. Singing that there was 'naethin there but skin and bone' would have been hilarious". 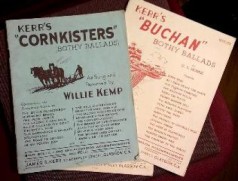 In the first half of the 20th century, the bothy ballad took on a more comical 'stage' form through the works of George Bruce Thomson, G.S. Morris and Willie Kemp. These more recent compositions - by and large very humorous - are sometimes called cornkisters to distinguish them from older 'traditional' bothy songs which tend to be more sober accounts of work and conditions on particular farms.

The Elphinstone Institute at the University of Aberdeen

Ian Olson is a renowned expert on the history and context of bothy ballads, looking at various themes in his excellent article "Bothy Ballads and Song" in the volume Scottish Life and Society: Oral Literature and Performance Culture (2007, John Donald/Birlinn).